A Story of
Stanley

The hardest thing when talking about Stanley is knowing where to begin.

Stanley came into my life at a happy time — I was newly married, had just bought a house, and recently started a new job. When he picked us, Stanley was a 6 month old puppy at a breeder’s 60 miles north of where I lived. After he decided on us, we took him into the breeder’s house to settle up. Stanley warmed up in the house and began running. Running. Running around the large farm house. Into the kitchen, through the dining room, into the living room, onto the couch, off the couch, into the kitchen, through the dining room… Boundless joy expressed through boundless energy.

Undaunted and laughing, we packed him into the car for the ride home. On the way home, my wife and I sang songs for Stanley since the car radio made him uncomfortable. As we drove under an overpass, Stanley would duck his head. By the time we got him home, he knew his name. Smart as a whip.

We took him into our large old house and Stanley, who had never been in a house before, was scared of everything — the television, the stairs, doors that slammed, being in a room by himself, and the sound of the furnace coming on. Whenever something strange and new would happen, Stanley would slowly, but nobly, crawl into my lap for security and a head rub.

Soon, his natural confidence came out – he explored the house and claimed several areas as his own – the corner of the couch by the front window, the area by the back door of the kitchen, and the master bedroom. With my support, Stanley became a confident dog.

My life has changed dramatically. A nasty divorce left me without confidence, possessions, money, and any desire to continue. My house was taken from me. The one thing, honestly — the one thing — I fought for was Stanley. Fortunately, he stayed with me.

I was scared of everything — dating, commitment, being alone, being with someone. I was unwilling to trust people. Whenever these feelings would hit, Stanley would proudly, confidently, and eagerly crawl into my lap offering security in exchange for a head rub.

Soon, my natural confidence came out. I began to explore my life again, finding what was left of the old and what new pieces were blossoming within me. I found my world, and my place in the world. With his support, Stanley helped me to become a confident, complete man again.

Now, I’ve purchased a big old house for me and Stanley to explore. My life is back on track, and I owe most of that to the wonderful little dog who has made my life complete.

The second hardest thing when talking about Stanley is knowing when to stop. Let’s stop here for now.
There will be more, certainly, but we’ll stop here.

“Alpha Training” is the process of helping your dog understand who “the boss” is.

This is a VERY important step in helping your dog to become a ‘good citizen’ because all dogs want — no, NEED — to know who their leader is. Since they’re social, pack animals, dogs are very interested in a structured hierarchy with a clearly defined leader. If a leader is not established, the dog seeks to fill that vacuum by placing themselves as the leader — certainly not something a good owner wants.

The method that I use with most of my dogs is a gentle “dominant down”. What I’ll do is sit on the floor cross-legged and leaning against a couch with the dog laying on their side on the floor in front of me, their back to my crossed legs. My hands are lightly placed on their rump and shoulder to prevent them from getting up. The dog is free to look around, fall asleep, whatever. They simply are not permitted to get up.

END_OF_DOCUMENT_TOKEN_TO_BE_REPLACED

Shortly after the untimely death of Stanley The Wonder Dog on November 21, 1999, I made the decision to get another dog. It was a call from the National Director of Rescues of the Jack Russell Terrier Rescue that convinced me to consider getting a ‘rescue dog’. That search led me to Belle, a 3 year old Jack Russell Terrier.

Stanley was a Jack Russell Terrier (JRT). He weighed approximately 14 pounds, had a broken white coat with black & fawn markings, and a black mask.

Stanley came into my life in May of 1992, at the age of 6 months. The Jack Russell Terrier breed is a breed developed for hunting, so Stanley was very interested in the birds and animals that frequented my backyard, and he loved to burrow under blankets, pillows, and the cushions on the couch. Stanley was trained to ring a bell to alert me that he needed to go outside. Its a good thing — he had not had an accident in the house in a couple of years!

Here’s a story about Stanley that I wrote when someone asked me to put Stanley on an Honor Roll.

More than just being a good dog, Stanley was a great friend. For the duration of our time together, he was my best friend.

To Those I Love
If I should ever leave you whom I love to go along the Silent Way,
Grieve not, nor speak of me with tears,
But laugh and talk of me as if I were beside you there.
(I’d come — I’d come, could I but find a way!
But would not tears and grief be barriers?)
And when you hear a song or see a bird I loved,
Please do not let the thought of me be sad…
For I am loving you just as I always have…
You were so good to me!
There are so many things I wanted still to do —
So many things to say to you…
Remember that I did not fear…
It was just leaving you that was so hard to face…
We cannot see Beyond…
But this I know:
I loved you so — ’twas heaven here with you.

“I had a linguistics professor who said that it’s man’s ability to use language that makes him the dominant species on the planet. That may be. But I think there’s one other thing that separates us from animals: We aren’t afraid of vaccuum cleaners.” — Jeff Stilson

“Dogs feel very strongly that they should always go with you in the car, in case the need should arise for them to bark violently at nothing right in your ear.” — Dave Barry

“I wonder what goes through his mind when he sees us peeing in his water bowl.” — Penny Ward Moser

“Did you ever walk in a room and forget why you walked in? I think that’s how dogs spend their lives.” — Sue Murphy

“Chihuahua. There’s a waste of dog food. Looks like a dog that is still far away.” — Billiam Coronell

This page is dedicated to my love of animals, mainly dogs, and specifically Jack Russell Terriers.

During my time with these incredible animals, I have done bell training with them to teach them how to tell me that they wanted to go outside. I think you might find it useful, too. Let me know if you have any questions or comments on this process.

If you’re interested in seeking a Jack Russell Terrier Rescue, the best page to start is here.

You can see his ears and the ear canals (black) going into his skull, and the bony round canal where the important ear stuff sits inside the eardrum. One canal is black and full of air (normal) and the other canal is grey and full of something not normal. We can’t tell if it’s just fluid (a nasty inner ear infection) or if it’s actually a mass (probably benign, but still needs to go) but the radiologist who reads the films will tell us next week. Either way he’ll be OK, but this picture was too cool not to share. 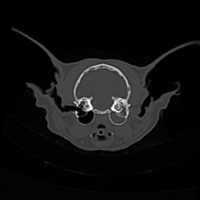 Click the picture for a larger view in a new window.
Â