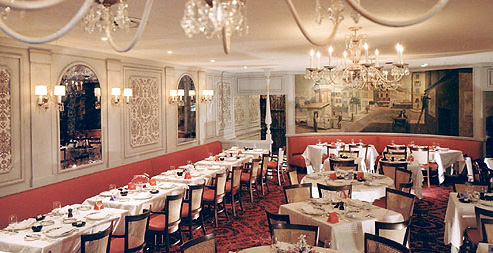 On Saturday, October 13, 2007, only a couple days after returning from a wonderful week of vacation in Mexico’s Mayan Riviera (report coming soon), I worked at Jean-Robert at Pigall’s.

When I arrived, I was greeted warmly and asked immediately if I was there all night. I said I was, and Raymond told me that I’d be running the amuse bouche and cheese stations since the guy that had been running them (“duh-Rob”) was, um, not coming back to the restaurant.

The kitchen gang had already done most of the preparation for the station (how they find time to finish their own extensive preparation lists — any one of which is more complicated than my little station — AND another station as well, I’ll never know!). I still had some preparation work to do to get ready for service — preparing duck purses (the amuse bouche is currently a duck purse, egg & fish ring, and chilled soup) and finishing a few other things before setting up my stations. I am convinced that if I had a prep sheet I would be able to execute it — do all my own prep — for the amuse bouche & cheese stations and be ready for service on time. They’ve hired a new guy to replace “duh-Rob”, so I may not get the chance to test that theory for a while.

During service, the tickets written by the servers are handed to Chef, who is working to my left side at the pass. He “splits” the tickets — re-writing it onto separate slips for kitchen stations — then gives the server’s original ticket to me, which constitutes a “pickup” order from my station.

I prepare duck purses, baking them for a few minutes in the convection oven until they’re crispy and warm. I draw a line of grainy mustard diagonally across a small square plate. The duck purse goes on one side of the line with a piece of toast, and the fish & egg ring goes on the other side, atop a smear of lemon cream. The fish & egg ring is topped with a lightly-dressed frisee salad. A demitasse cup is filled with the chilled soup (fennel, this evening) and topped with a quenelle of chantilly cream and some chopped chives. When vegetarians or people with food allergies come in, we make special accommodations for them throughout all the stations. The amuse is moved to the pass (I only have to turn around to be at the pass) and given to servers who whisk it away to the guests. I mark the ticket and move it to the ticket hanger. Repeat 100 times.

When a cheese order comes in, I take a long rectangular plate and put 4 pieces of different cheeses on it in ascending order of flavor, bleu cheese is at the far right end. I then take a small silver serving spoon and top it with wonderfully runny Epoisses cheese and add that to the rectangular plate. The plate is dressed with mustarda, a quenelle of fruit compote, and a line of port wine reduction. A nice bowl of three kinds of toast goes out with it.

I found the evening’s pace to be brisk but was able to manage it easily. Any time I asked Raymond for anything — like to replenish my soup or to fire more duck purses — he jokingly (and loudly) announced to the kitchen, “Vogel is weeded!”. There was a clear “half time” as I got to the top of my orders. It was quiet at my station, and after restocking and cleaning up, I was able to track the progress of particular tables as their tickets moved around the kitchen.

Because of my proximity to Chef, I had the chance to observe him at work and have a good conversation with him. Earlier in the day, he took me over to the location of his next project — a lounge called TWIST.

It was a fun evening (if your definition of fun is, like mine, working your ass off in a hot, dark, crowded space!) and I really enjoyed working the station. After cleaning up my station, I hung around for a glass of wine with Chef before heading home.