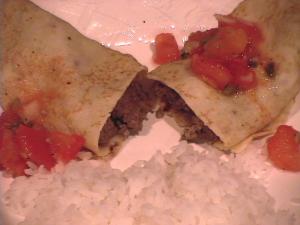 From Deus Ex Culina. This is a surprisingly simple recipe that looks wonderfully complicated…

When I lived in Paris, it was customary for my friends and I to go out and have cider and galettes in the fall. The cider would be served in a large bowl-like mug and the galettes were thin and tasty, and contained either sweet or salty fillings. Galettes are made with buckwheat flour. The recipe I have calls for regular flour, so these, technically, are crepes.

You should make the batter yourself. It’s not hard at all and you’ll find that the ready-made stuff is too sweet for this kind of dish.

FILLING:
Mix the beef and the seasonings together in a large bowl. Cook fully in a skillet over medium-high heat — should still be moist, though. Set aside, once cooked.

Get the largest skilled you have and heat up. Spray with non-stick spray. Keep heat at medium level. Take a ladle and pour into the skillet making sure you turn the skillet around to spread the batter over the surface in a thin layer. It cooks fast — no bubbling like with pancakes. You have to flip them over quickly with a spatula and your fingertips.

Once you’ve made your crepe, place it on a plate, spoon some filling on it, and roll it up.

That’s it! You can serve it with some fresh spicy salsa topping (warm up first) or a dollop of sour cream. You can really use any kind of filling you like! If you have any left over crepes (this recipe usually yields 10 crepes), you can serve them for dessert: fill them with Nutella and serve with sliced strawberries…

June 11-June 17 2007 is 7 DAYS FOR SIDS week in the Cincinnati area. SIDS is Sudden Infant Death Syndrome, which is the number one cause of death for infants aged one week to one year. 7 DAYS FOR SIDS was founded by Jean-Robert de Cavel and his wife, Annette following the tragic death of their baby daughter Tatiana to SIDS on June 13 2002.

More than 30 restaurants and businesses are participating in the event.

In just four years, 7 DAYS FOR SIDS has raised more than $300,000, making it the largest SIDS fundraiser in the United States. While de Cavel is elated by this success and grateful for other restaurants’ generosity, the week of his daughter’s death is still painful.

“It is not necessarily a week when I have a good time,” he says. “But I think it’s the best thing I could’ve done for the memory of our daughter.” (via Cincinnati Enquirer)

One of the showcase events of the week is Chefapalooza on Tuesday June 12 at the Midwest Culinary Institute at Cincinnati State Technical and Community College. Chefapalooza features famed New Southern Cooking Movement chef Nathalie Dupree who joins Jean-Robert de Cavel and David Cook (of Daveeds at 934) for lively cooking demonstrations. Samples of the food prepared by these three chefs will be available, paired with wine, after the event. Hosts for the evening are Jean-Robert de Cavel and Meg Calvin. This event is affordable at $50/pp but tickets to this event go rather quickly, so reserve while tickets are still available.

Another important event is Homerama Cooks for a Cure on Wednesday June 13. The ultimate test kitchen: chefs from the area’s top restaurants present cooking demonstrations in designer homes, and you get to eat the results! Tickets are available at the door, $12.

For a full list of participating restaurants and their specials, see this PDF poster or visit the 7 DAYS FOR SIDS web site.

Just remember: your appetite can help the cause!

From this page comes this Tuesdayâ€™s questionâ€¦Â What are 10Â occupations I wanted when I was young? In no particular orderâ€¦

Though I attended, I didn’t eat ANYTHING because my stomach was very upset from something I’d eaten previously that day. Everything looked and smelled as good as it could in my condition, and Wendy reports that her meal was outstanding.

Thomas Keller, of the French Laundry and Bouchon restaurants, shares his method for simple and satisfying roast chicken.

-= Instructions =-
Preheat the oven to 450. Rinse the chicken inside and out with cold water, then dry it very well with paper towels, inside and out. The less it steams, the drier the heat, the better.

Salt and pepper the cavity, then truss the bird. Trussing is not difficult, and if you roast chicken often, it’s a good technique to feel comfortable with. When you truss a bird, the wings and legs stay close to the body; the ends of the drumsticks cover the top of the breast and keep it from drying out. Trussing helps the chicken to cook evenly, and it also makes for a more beautiful roasted bird.

Now, salt the chicken — I like to rain the salt over the bird so that it has a nice uniform coating that will result in a crisp, salty, flavorful skin (about 1 tablespoon). When it’s cooked, you should still be able to make out the salt baked onto the crisp skin. Season to taste with pepper.

Place the chicken in a saute pan or roasting pan and, when the oven is up to temperature, put the chicken in the oven. I leave it alone — I don’t baste it, I don’t add butter; you can if you wish, but I feel this creates steam, which I don’t want. Roast it until an instant-read thermometer inserted into the thickest part of the thigh reads 160-165 degrees, about 50-60 minutes. Remove the chicken from the oven and add the thyme, if using, to the pan. Baste the chicken with the juices and thyme and let it rest for 15 minutes on a cutting board.

Remove the twine. Separate the middle wing joint and eat that immediately. Remove the legs and thighs. I like to take of the backbone and eat one of the oysters, the two succulent morsels of meat embedded here, and give the other to the person I’m cooking with. But I take the chicken butt for myself. I could never understand why my brothers always fought over that triangular tip — until one day I got the crispy, juicy fat myself. These are the cook’s rewards. Cut the breast down the middle and serve it on the bone, with one wing joint still attached to each. The preparation is not meant to be superelegant. Slather the meat with fresh butter. Serve with mustard on the side and, if you wish, a simple green salad. You’ll start using a knife and fork, but finish with your fingers, because it’s so good.
** This recipe can be pasted into BigOven without retyping. BigOven.com ID= 161418 **
** Easy recipe software.Â  Try it free at: http://www.bigoven.comÂ Â Â  **

From this page comes this Tuesdayâ€™s questionâ€¦Â What are 10Â awesome things about me? In no particular orderâ€¦

The theme was “Summer Quaffing Wines from Tin Roof Wines, California” (with wines from Glazer Distributors), and the menu was as follows:

First Course
Chilled Cucumber, Mint, and Melon Soup
Sauvignon Blanc, 2006
This course turned out to be the weakest of the evening, both in individual components (the soup wasn’t great and the wine wasn’t great) and in pairing. The cool soup was refreshing, but the flavors weren’t distinct and the soup & wine simply did not pair well.

Second Course
Baby lettuces from Sallies Organic Farm with Fresh Mozzarella Crostini, Basil Oil, and Rainbow Trout
Chardonnay, 2006
This was one of my favorite courses of the evening. TheÂ lettuces were very tasty without beingÂ overdressed and losing the fresh flavor of the lettuces. The crostini was good, and I really enjoyed the trout. While Wendy & I are notÂ fans of Chardonnay, we found this one to be more than acceptable. Ted, on the other hand, really likes chardonnay — “the oaky-er the better!,” he said.

Third Course
Grilled Pork Tenderloin with White Bean Puree, Rosemary, and Roasted Grape Tomatoes
Cabernet Sauvignon, 2005
In my opinion, the most overall successful course & pairing of the evening. The plates were attractively presented, and the flavors of the perfectly-cooked pork, the bean puree, and the tomatoes went very well together, and complimented the wine very nicely.

Fourth Course
Grilled Skirt Steak with Mango Chutney and Barley Salad
Syrah Cabernet, 2005
Our table was divided about this course. We all enjoyed the flavor of the skirt steak, but some of us thought that the barley salad’s texture was off-putting while others of us enjoyed it. The mango chutney was spicy, so this dish had some heat to it, which stood up nicely to the wine. One thing we all agreed upon: this course should have been served warmer.

Fifth Course
Strawberry Shortcake served with Farmer John Branstrators local & organically-grown strawberries
Rose’, 2006
Strawberry shortcake is a dessert that I never seem to think of, but when it is served to me, I always enjoy it. The shortcakes were perfect — not too heavy nor too sweet. The strawberries were at their peak of freshness & sweetness, so the dessert was wonderful for a warm summer evening. We all felt that the Rose’, while moderately enjoyable on its own, was a poor pairing for this dish. The dessert was sweeter than the wine which brought out the wine’s vinegar flavor.

It was certainly a pleasant evening. The wine dinners at Rondo’s are very affordable — only $35 for everything (tax & tip not included). We’ll go back!