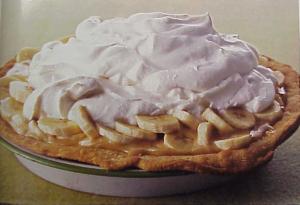 1. Put oven rack in middle position and preheat oven to 425.

2. Pour condensed milk into pie plate and stir in a generous pinch of salt. Cover pie plate with foil and crimp foil tightly around rim. Put in a roasting pan, then add enough boiling-hot water to reach halfway up the side of the pie plate, making sure that foil remains above water. Bake, refilling pan to halfway with water about every 40 minutes, until milk is thick and a deep golden color, about 2 hours and 10 minutes. Remove pie plate from wather bath and transfer toffee to a bowl. Chill toffee, uncovered, until it is cold, about 1 hour.

3. While the toffee is chilling, clean pie plate and bake pie crust in it according to package instructions. Cool pie crust completely in pan on a rack, about 20 minutes.

4. Spread toffee evenly in crust, and chill, uncovered, 15 minutes. Can be prepared ahead to this point. Cover toffee-fille crust after 1 hour.

5. Cut bananas into 1/4-inch-thick slices and pile over toffee.

6. Beat cream with brown sugar in a clean bowl with an electric mixer until it just holds soft peaks, then mound over top of pie.
** This recipe can be pasted into BigOven without retyping. BigOven.com ID= 161247 **
** Easy recipe software.Â  Try it free at: http://www.bigoven.comÂ Â Â  **
Â

Author: Drew
Filed Under: 2007: Recipe of the Week, A Front Page Item, Recipes
Tags: bigoven, drewvogel, Recipes
10 on Tuesday: Ten Things You Love About Springtime
Quote of the Day