This evening was the first-SaturdayÂ Wine Dinner at the Iron Horse Inn. Wendy & I joined a bunch ofÂ friends at the table for a great meal. Our party was 13 people strong! We love taking new people to the Iron Horse — all we have to do is get them to attend once, and they’re hooked!

First Course
Torched Scallop Appetizer, Apple-Cider Gastrique
Ferrandiere Chardonnay
A pair nicely seared scallops atop the gastrique. Very simple, but very delicious. Typically, we don’t care for Chardonnays, but Brian Scott (the wine guy for the night) has helped us to see that we do, in fact, like French Chardonnarys.

Second Course
Roasted Winter Squash Bisque, Green Peppercorn-Merlot Drizzle
Apex Merlot
The soup was warming, hearty, and well-flavored. The drizzle addedÂ a very nice counterpoint to the rich flavors, and it paired well with the Apex Merlot, which was a standout wine of the evening.

Third Course
Cherry-Maple Glazed Duck Breast, Gorgonzola Sweet Potato Puree
Rabbit Ridge Zinfandel
This was a lovely dish. The maple on the duck breast is a natural pairing and it was delicious. The sweet potato puree was good, but I missed the flavor of the gorgonzola.

Fourth Course
Char Grilled Ribeye, Guiness-Soy Demi-Glace, Sesame Whipped Potatoes, Fried Onions
Omrah Cabernet
The standout in this course, for me, was the sesame whipped potatoes. They were really tasty!

DessertÂ
Mandel BrotÂ
Moscato D’Andrea
This was sort of a once-baked biscotti with dried blueberries and white chocolate chips. Very, very tasty and soft enough to be enjoyable.

From this page comes this Tuesday’s question…Â In no significant order, 10 things I’d like to learn how to do:

Melt chocolate and butter in heavy saucepan over low heat, stirring constantly. Cool 10 minutes. Add sugar mixture to chocolate mixture and whisk until smooth. Whisk in eggs one at a time, then whisk in yolks. Divide batter between prepared pans. (Can be prepared 1 day ahead. Cover and refrigerate.)

Preheat oven to 350. Bake cakes until puffed, dry, and cracked on top and tester inserted into center comes out with some wet batter attached, about 30 minutes (33 minutes if batter has been chilled).

Cool cakes 10 minutes. Cut around cakes to loosen before turning out onto 2 plates. Serve cakes warm.
** This recipe can be pasted into BigOven without retyping.Â Â Â Â  **
** Easy recipe software.Â  Try it free at: http://www.bigoven.comÂ Â Â  **
Â 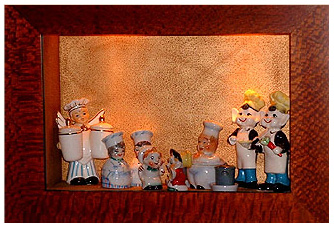 I’ve worked at Jean-Robert at Pigall’s a few times this year, and noticed that I failed to blog those visits. Back on Saturday, February 3rd, I worked at the restaurant and cut the daylights out of my left middle finger (see this picture for a diagram of the cut) with a new knife. With the assistance of Raymond, I got bandaged up (well, DUCT-TAPED up), gloved, and went right back to work. I finished my shift; something I am proud of. Once I got home, Wendy was able to treat the wound, bandage, and look after it — it has healed with only a tiny scar. Honestly, I was hoping for a more substantial physical rememberance of that event!

On March 10, I worked again at Jean-Robert at Pigall’s. It turns out that it was a great night for me to work — one of the line cooks was on vacation, one of them went home sick (she was there when I arrived and looked like crap, so Chef said she could go home), and it was a moderately busy evening. As a result of my presence, there was enough staff to allow shifiting of responsibilities.

After quickly training me on the amuse bouche station (she’d completed all the mise en place for the station), Abby was freed to go work the apps station with Rob (who was covering for vacationing Sarah). Raymond ran the fish station for sick Amanda. With Abby checking on me, I was able to cover the amuse station for the evening. The amuse was an egg mimosa stack; a duck purse (cream cheese, duck confit, and duck liver wrapped in filo dough and baked); a small piece of toast, and pickled cucumber with a drizzle of sweet mustard under the duck purse and around the plate. A demitasse cup of rutabegga soup topped with chantilly cream and chives went along with it.

Another responsibility of the station is to begin the flow of order tickets from servers to the cooks, so once the servers took my amuse, I drew a line down the column indicating they’d been sent and hung the order ticket on the hanger bar on the line. From there, the order ticket moved to indicate what course the guests were enjoying, from cold & hot apps to their main dishes, then back to ‘my’ section of the hanger bar for desserts. I moved Karen’s awesome desserts down from the window to the pass table for Chef’s final examination before it went to the dining room. By keeping an eye on the tickets, the diner’s progress through their evening can be tracked at a glance — I had a couple friends celebrating in the restaurant that evening (hi Doug & Kevin!) and I was able to monitor their progress easily.

I also had responsibility for any cheese courses that were ordered. When a cheese order came in, I set up a long rectangular plate with 5 different types of cheese (including a spoonful of Epoisses de Bourgogne, Wendy’s favorite), a quinelle of pear chutney in one corner, and a blob of a citrus-rind-y dice in the other corner, and a drizzle of port reduction down the length of the plate. Cheese plates are served with three types of toast in a ‘cup with ears’ on an underliner.

Stationed where I was, I was elbow-to-elbow with Jean-Robert for the whole evening. He was in a good mood, and since it was a moderately busy evening, we had the opportunity to chat, which was very enjoyable. I also got to observe him finishing each plate and saw the care and detail he puts into each and every plate that goes out. He also allowed me to call in a bunch of orders.

It was a good night, but I was tired at the end of the shift so I cleaned my station and only had one beer before heading home.

Jean-Robert absolutely insisted that I post this picture of one of Cincinnati’s warmest, friendliest, and (generally) best-dressed people in a costume for a fourth of July party. The individual in question was careless enough to allow this picture to fall into my hands. Please excuse the rather low quality of the picture — it was scanned from a picture printed on a color printer. Perhaps the owner of the original picture would be so kind as to send me a high-quality digital file so I can replace it? That way, it would be easier for curious viewers to see the long flowing locks, the dog collar, the leopard skin pants, the studded belt, and the fur-lined jacket. And is that a lip-ring?Â  Would anyone care to guess who this character might be? (click the picture for a larger view)

From this page comes this Tuesday’s question…Â What are my 10 favorite albums? As you will soon see,Â I was unable to select just 10 favorite albums. Each of the albums below are in the category of “nearly perfect album” in my mind. These recordings stand together as a cohesive whole, and while each album is comprised ofÂ amazing ‘parts’, are more than the sum of their parts.

In no particular order…

-= Instructions =-
AVOCADO CREAM:
Combine all ingredients in a food processor fitted with a metal blade. Puree until very smooth. Pass through a fine mesh strainer. Season with salt and pepper.

FRESH SALSA:
Mix tomatoes, onions, garlic, cilantro, and jalapeno to form a salsa. Season with salt & pepper. Salsa should be fairly dry so it holds its shape in the mold.

LEMON VINAGRETTE:
Puree onion in food processor, transfer to a small mixer. Add all ingredients except for olive oil. Mix evenly then slowly add the olive oil a little at a time until an emulsion forms. Adjust seasonings and hold for service.

ASSEMBLY:
In a 2-inch ring mold, put a thin layer of the salsa, a layer of the crab (about 3 ounces), and top with avocado cream (smooth with an offset spatula). Unmold. Top with dressed micro greens.