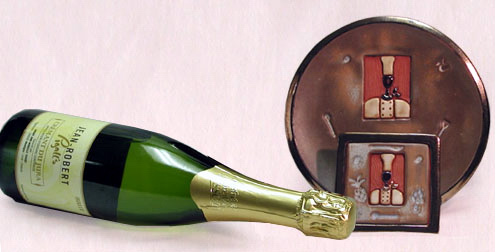 It’s official. I’ve lost count of how many times I’ve worked at Jean-Robert at Pigall’s, but I was there again today, working prep only (arriving at 1:00pm and staying till about 5:30pm). While there, I topped-and-tailed snow peas, sliced shallots, helped with the preparation of the amuse bouche (a ring salad with fennel slaw on the bottom and fish salad on top), prepared seafood ratatoui (with lots of shrimp, scallops, and lobster mixed in with the vegetables) that will eventually be stuffed into zucchini blossoms. I also sliced, seasoned, and baked off toast for the bread service and made a few polenta-stuffed zucchini cakes for Rob. As usual, I worked anywhere I was useful!

I must have been holding my trusty knife incorrectly because I ended up with a nasty blister on my right index finger. I ate a bit of family meal — noodles with boiled chicken, corn, onion, and peas.

I wish I could have stayed through service and beyond tonight not only because I enoy being there, but because it’s Flo’s last night. Flo is a nice young man who is starting culinary school on Tuesday, and has (wisely) chosen to make school his full-time job. I enjoyed working with Flo. He’s a hard worker and well-liked in the kitchen at Pigall’s, so I would imagine his send-off after service will be quite …messy… and fun (well, fun for the rest of the gang; maybe not so much for Flo!). Best of luck with culinary school, Flo!

Reflecting a bit on Flo’s transition, I was there before he arrived and have been there during his entire employment at Pigall’s. It’s interesting to think that I’mÂ becoming an ‘old-timer’ at the restaurant!