CULINARY: My tenth night at Pigall's 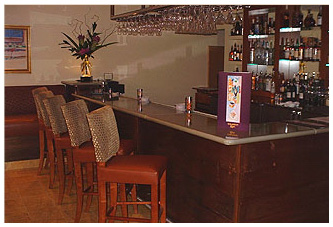 On Friday, December 30, 2005, I worked at Jean-Robert at Pigall’s for my tenth night of 2005. It was January of 2005 that I started volunteering at the restaurant. Today, I arrived around 1:00 and walked in to find the place buzzing with activity. The guys were working hard to prep for the evening’s service, and also trying to get ahead for the New Years parties the following day.Â

I washed up and jumped in, hearing Dan say that I’d arrived on a good night. First thing I did was work with Dan to prepare some standard mirpoix with the addition of halved lemons. Once done with that quick job, we dumped the lemony mirepoix into two kettles of boiling water. I was then sent down to fetch 60 or so live lobsters from downstairs where they were waiting. I pushed a ‘booty stick‘ (someone had scrawled that on the box of sticks) into the lobster’s tail before dropping it head-first into the boiling water where it stayed for about 6 minutes, then the bright red lobsters went into an ice bath that Dan had set up. Because Chef hadn’t arrived yet and we didn’t know exactly how he wanted them prepared past that point, we stored them in the cooler for a bit while I worked on a few other tasks.

Seeing that I was available, Robby asked me to brunoise some butternut squash for him, which would later be sauteed and used in one of his dishes. After peeling and slicing the butternut to the correct thickness on the slicer, I got to try out the new ceramic knife that Wendy gave me this Christmas, and the guys were quite interested in trying it out as well. It’s ‘wicked sharp’ and seems to be very strong and hold its edge well. I also used the ceramic knife to help Jeremy ‘top and tail’ some unfamiliar strange looking vegetables (they looked like petrified worms) called Crosnes. I’m not sure what dishes they were to be used in, but the two of us made quick work of the large pile of them.

Once done with the Crosnes, I moved on to prepare a vegetable puree for Dave (DUDE!). I peeled and steamed some potatoes and added them to a steamed mix of carrots and other winter vegetables, which I then pureed in a blender to a smooth consistency. I then ‘hung’ the puree (in a chinoise lined with cheesecloth over a bain) for use the next day. Dave then asked me to help make some tomato confit for him… I took a half-pan and put in some cut onion, chives, shallot, salt, and pepper. I halved and seeded some Roma tomatoes and added them, cut side down, to the pan. I then poured extra-virgin olive oil about halfway up the tomatos which were then roasted low and slow.Soon, the overhead lights went out, leaving on only the dimmed kitchen lighting with spotlights that indicate that service has started. Even after volunteering at the restaurant for a year, the ‘lights out’ still sends an electric thrill through me. However, I wasn’t on the line tonight and since there was a big party planned for the next day, I worked the rest of the evening prepping for that.Â

Chef had instructed us on what he wanted with the lobsters, so we set to taking them apart. Frankie, Jeremy, and I worked on twisting off the tails, removing the claws and knuckles. The knuckles were cut and that bit of meat removed and I worked on cracking the claws to free that meat before assisting Jeremy with opening the tails. The last bit of fun with the lobsters was to open the carapace and removed the innards (which were saved to make a nice stock), clean the shell, and cut out the lobster faces. Yes, you read that right. Cut. Out. The. Lobster. Faces. Using sturdy kitchen shears, I was charged with cutting out the faces, which will be used as a garnish. Once done, I put them in a bowl of acidulated water, covered it, and labelled it (what else?) “lobster faces” before putting it in the walk-in.

I worked on duck confit with Jeremy. The duck had been cooked in its own fat (the definition of ‘confit‘ is ‘cooked in fat‘) earlier in the day. Once cooled, we picked the tender duck meat off the bones into containers for use the next day. I then had the adventure of cleaning up the duck fat, which eventually got added to a larger (and heavier) bin of duck confit that had to be moved from the meat walk-in to the prep area. Jeremy joked that one of the nice things about having a volunteer was that I got to move the heavy stuff.

My next task was to cut up a ton of specialty mushrooms, which didn’t take too long. While doing that, Matt (one of the guys at the restaurant who had always gone out of his way to make me feel welcome there) told me that tonight was his second-to-last night cooking at Pigall’s. He was leaving the restaurant for a different opportunity at another place. Matt will be working at Daveed’s starting in the middle of January 2006. Best of luck to Matt!

Looking at the reservation list, I noticed that Mike, one of my instructors from Culinary School, was dining in the restaurant this evening. I explained to Todd and Chef how I knew him and asked his server to let him know I was there. Mike came back after his meal to say hi to the kitchen.

All the folks in the kitchen were feeling a bit crispy. They’d just come off an extremely busy December and were looking forward to their break, from Sunday through Thursday of next week, when the restaurant is closed. Those days are the time for the employees to rest up and reconnect with their family and friends. Not even considering the physical demands, working in a restaurant is a difficult job because your hours are so opposite those of the rest of the world. Everyone earned this well-deserved time off.

I left the restaurant around 11:30pm.