Fred Rogers died at his home in Pittsburgh after a brief battle with stomach cancer, according to a spokeswoman for his production company. He is survived by his wife Joanne Rogers, their two sons and two grandsons, according to his Web site. 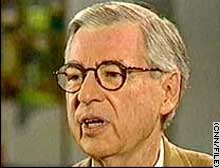 Marisa Lynch, who has worked for Family Communications Inc. for nearly 20 years, said she was in shock.Â

“We just learned about his illness in January,” she said. “Luckily, he didn’t suffer.”

Staff members rushed into work around 2:20 a.m. after hearing that the venerable host of the long-running PBS show “Mister Rogers’ Neighborhood” passed away, Lynch said.

“We’re very loyal and dedicated,” she said of the employees.

The Web site for Family Communications Inc., the non-profit company that produces the show, issued the following statement:

“We are very sorry to deliver the sad news that Fred Rogers died on February 27, 2003 after a brief battle with stomach cancer. We are grateful for the many people, young and old, who have cared about his work over the years and who continue to appreciate Mister Rogers’ Neighborhood on PBS. We hope that you’ll join us in celebrating his life by reflecting on his messages and taking them into your everyday lives.”

According to the program’s Web site, Fred McFeely Rogers was born in 1928 in Latrobe, Pennsylvania, 40 miles east of Pittsburgh.

Rogers began developing his ideas for children’s programming in the 1950s. He is best known for “Mister Rogers’ Neighborhood,” which began in its early form in 1963 as a show on Canadian Broadcasting Corporation.

Rogers took the idea to the U.S. and in 1967, the first “Mister Rogers’ Neighborhood” aired on Pittsburgh’s WQED in 1967. A year later, PBS picked it up.

The slow-paced show offered an alternate universe to most of today’s quick-edit cartoon children’s programming. But on the eve of his final show, Rogers told CNN’s Jeff Greenfield he looks at it as more than entertainment; it’s a chance to reach young people and give them a foundation for a good life.

“I believe that those of us who are the producers and purveyors of television — or video games or newspapers or any mass media — I believe that we are the servants of this nation,” Rogers said.

That’s why he got into television in the first place.

“I got into television because I hated it so,” he said. “And I thought there was some way of using this fabulous instrument to be of nurture to those who would watch and listen.”

Up until the end, the show was taped at WQED, and until the end it started with Rogers donning a cardigan sweater and comfortable shoes as he enters his home in the Neighborhood of Make-Believe.

Through the years, Rogers featured artists ranging from cellist Yo-Yo Ma to bodybuilder-actor Lou Ferrigno. He dealt with the death of pets and divorce, while teaching children to love themselves and others. His recurring characters included Mr. McFeely and Lady Elaine Fairchilde.

“Mister Rogers’ Neighborhood” won loads of recognition, including four Emmys and a lifetime achievement award. A cardigan sweater belonging to Rogers hangs in the Smithsonian.

Those sweaters became Rogers’ identifying characteristic. He credited his mom for the fashion statement that says, more than anything else, “Won’t you be my neighbor?”

“My mother made a sweater a month for as many years as I knew her,” Rogers said. “And every Christmas she would give this extended family of ours a sweater.

“She would say, ‘What kind do you all want next year?’ ” said Rogers. “She said, ‘I know what kind you want, Freddy. You want the one with the zipper up the front.’ ”

“I do think that young children can spot a phony a mile away,” he says.

And it also made him the butt of parody by adults like comedian Eddie Murphy, who played his own version of Mister Rogers on “Saturday Night Live.”

Rogers knew for a fact that Murphy meant no harm with his humor. In fact, they met once.

“He just put his arms around me and said, ‘The real Mister Rogers,’ ” he said.

On the last show, Rogers entered his home and donned his red zip-up sweater and traded his loafers for a pair of comfy blue sneakers.

The finale ended a weeklong tribute to art, with Rogers leafing through a stack of drawings kids made of the Neighborhood Trolley “to see how different people draw the same thing.”

Rogers said he hoped kids who watch it will take it with them as they grow into adults.

“We all long to be lovable and capable of loving,” he said. “And whatever we can do through the Neighborhood or anything else to reflect that and to encourage people to be in touch with that, then I think that’s our ministry.”

In 2002, President George W. Bush presented Rogers with the Presidential Medal of Freedom, the nation’s highest civilian honor, recognizing his contribution to the well-being of children and a career in public television that demonstrated the importance of kindness, compassion and learning.

On January 1, 2003, in his last public appearance, Rogers served as a Grand Marshal of the Tournament of Roses Parade, and tossed the coin for the Rose Bowl Game.