Over The Rhine Tribute CD — What It Takes To Please You — ARRIVES!

This project could have been a lunchbox. Or a wax museum. Or sets of limited-edition Grenada-issued commemorative stamps. 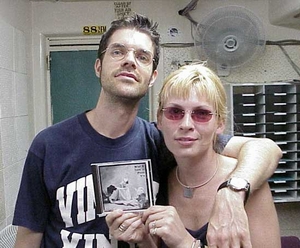 Linford and Karin holding the Tribute CD during their visit to our radio program.

Back in October of 1997, a fan named Joel Smith had jokingly proposed the suggestions above (among others) to elevate the band's status nationally. The audience was an internet newsgroup for fans of one of Cincinnati's more famous exports to pop music, Over the Rhine. The one we latched onto was the tribute CD.

The average tribute CD is generally a dark spot on progress and humanity for the latter part of the last millennium and can be a painful experience. Like Communism, it often seems to work better on paper. The challenge for us, obviously, was how to make this one work.

The best thing we had going for us was the songs themselves. What separates Over the Rhine songs from the majority of modern music is the raw honesty transmitted in the recordings, and especially in the live performances. If each contributor would be even half as honest as the band in recording their rendition, we figured we'd be on to something.

Why would we want to do this in the first place? What makes all these people think they could possibly redo a loved song into a version that still holds merit? We're not sure we know the answer to that, but as we explained to Karin and Linford of the band, perhaps it's that every singer or musician has a short list of songs he wishes he'd written. Maybe it's the melody, or maybe the lyric strikes a personal chord. Covering the song seems to make it your own, or even to continue telling the story. And then perhaps you can affect people anew.

(Generosity begins.) So a call was sent out, and contributions steadily poured in from across the country. 22 varied recordings and interpretations were donated from eleven states (Montana, where were you?!). And, strangely and happily enough, many of these works capture that same honesty that inspired us in the first place. "What It Takes to Please You", a lyric culled from Over The Rhine's 1994 work "Happy with Myself?", seemed a fitting title for the project. The pieces were slowly coming together.

(Generosity abounds.) Entrepreneurial Drew Vogel came along for the ride, and helped to push the train back on the tracks when it had derailed. Fellow newsgroup member Lindsey Harnish provided eloquent words. Renowned photographer Michael Wilson helped greatly with his amazing work. Talented individuals from local companies, such as Chris McLennan, Mary Watkins, Ted Halloran, Paul Bernheimer, and Ken Volz donated talent, energy, and resources to make this project a reality.

(Generosity flows.) All of the profits from this project will be donated to Greater Cincinnati Community Shares. In their own words, they are "a federation of hard-working, no-frills, nonprofit organizations which are having a positive impact on many of the toughest issues facing Greater Cincinnati."

The philosophy of the Community Shares organizations: "We believe it is not enough to provide charity. We work for positive and enduring change in the lives of individuals and in the community. The Community Shares organizations encourage individuals to take responsibility for their lives and for their community. We give people options that lead to self-sufficiency. Our organizations also work to bring about systemic changes in order to create more equal opportunity for all people."

Music that brings about change? In a roundabout way, it seems to happen all the time. Stranger things have happened, I guess.

Light a fire, listen, and enjoy.