Our Experience with Laser Vision Correction

On Wednesday, May 9, 2001, Wendy and I had appointments at LASIKplus Vision Center in the Kenwood area of Cincinnati, Ohio for evaluation of our candidacy for LASIK (Laser in-situ Keratomileusis) treatment. LASIK is an elective surgery that can reduce or completely eliminate the need for glasses or contact lenses.

We spent a couple of hours with the nice folks at the center as they evaluated our vision and answered all of our questions (all four pages of questions!). After the most comprehensive eye examination I had ever received, I was told that I was a candidate for LASIK. My uncorrected vision was -2.25D in the right eye, -2.00D in the left eye with an astigmatism of -0.75D in the right eye and -1.25D in the left eye. I was considered “myopic” or nearsighted. Without glasses, I was 20/200 (legally blind if uncorrectable, I’m told!) and not permitted to drive without glasses.

There are two laser options at the LASIKplus Vision Center. First is the VISX laser, which is an older laser with some limitations on the size of the treatment area. The Bausch & Lomb laser is the cutting-edge laser with enhanced capabilities.

Since the VISX laser can correct myopia (nearsightedness) between 0D to -12.0D with up to -4.0D astigmatism (as well as hyperopia (farsightedness) between +1.0D and +6.0D with up to 1.0D refractive astigmatism), which at $499/eye is the most affordable LASIK option offered by the center, I was very comfortable with the prospect of having my vision corrected by the VISX laser. 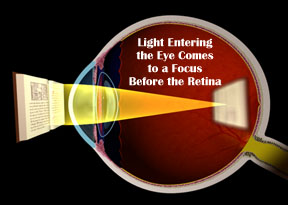 Wendy was informed that she is also a good candidate for laser vision correction, however, due to some special circumstances, it was determined that she would be best to use the Bausch & Lomb laser since it treats myopia (nearsightemyopia (nearsightedness) ranging from -1.00D to -7.00D and treats astigmatism less than 3.00D. The B&L laser also has a larger treatment area, which was important since the diameter of Wendy’s pupils is too large for a good treatment on the VISX.

Was I nervous? Yes!

A nurse came in and offered advice on what to expect, as well as a welcome dose of Valium to help sooth my nerves. She told me that the actual laser procedure would be less than 20 seconds per eye, and that I would be in and out of the surgery suite in under 10 minutes. The other recommendation was that I go home immediately after the surgery and sleep for a few hours. She got me prepped for surgery (gauze pads taped to my temples and a funny little hair-net-thing over my hair), and left the room.

Very shortly, Dr. Marino came in and gave me some last minute instructions and reassurance and we went into the surgery suite.

I was instructed to lay down on the bed of the VISX laser. Some adjustments were made to my positioning on the bed, I received numbing eyedrops, and then the bed was pivoted under the laser apperatus. From underneath, I could see a small round window with a blinking red light behind it and very little else. My right eye was first. It was fitted with a speculum to prevent blinking, and some drops were put in (I think).

The only discomfort I felt during the entire procedure was when the suction ring was activated on each eye. There is noticable pressure on your eye and your vision ‘dims’ (similar to the ‘dimming’ you experience if you rub your eyes fairly hard) for about 3-5 seconds. My vision cleared up (un-dimmed) completely once the suction ring was deactivated. I also twitched when Dr. Marino turned on the keratome because the sound startled me (both times!), even though he told me to expect it! The keratome, to my understanding, is what cuts the ‘flap’ that the doctor pulls back to expose the area to be treated by the laser.

Once the ‘flap’ had been cut, I perceived that Dr. Marino was working around my eye — a flurry of indistinct motion. I couldn’t feel anything that he was doing.

Then, he opened the ‘flap’. At that point, the vision in the eye changed — the blinking red light went from blurry (due to the drops in my eye) with a distinct red ‘focal point’ to just very blurry. Dr. Marino began the laser treatment of my eye. The only way that you know he’s operating the laser is that he instructs you to hold completely still and you hear a ticking noise, along with a technician counting down the seconds of your treatment. Dr. Marino has complete control of the laser at all times and can stop the procedure at any instant, just in case. The VISX laser (as well as the B&L laser) has a sophisticated tracking mechanism that allows the laser to track and adjust treatment for any small movements of the eye during the procedure. My right eye required 17 seconds of laser treatment, and my left eye needed 15, I think.

When he’d finished using the laser, he closed the ‘flap’, aligned it, and smoothed it down. The speculum was removed and a protective patch was placed over the right eye while he moved to begin working on the left eye. My right eye felt no discomfort, but was far more comfortable being CLOSED while he worked on the left eye. The procedure for the left eye was identical to the right.

Once the left eye was done, the bed of the laser pivoted out and I was asked to sit up and then slowly rise. Everything looked as though it was underwater, which I was told would happen as a result of the surgical trauma to the eyes. I was out of the surgery suite in 8 minutes. Dr. Marino led me into the examination room and looked at my eyes through some apparatus to double-check his work. He also allowed Wendy to peek through so that she could see the incisions.

My eyes were then covered by clear plastic ‘bug eyes’ and then sunglasses. I was given a pack with my old glasses, some tape (for the ‘bug eyes’), a sample packet of lubricating drops, and assorted printed materials (including a nice coupon for sunglasses!). We were on the road home before 2:50pm.

At that point, both of my eyes were more comfortable being closed, but when I opened them, I could already notice a distinct improvement in my distance vision. I was able to clearly read street signs FAR more quickly that I had been able without glasses.

I followed the advice and took a nap for a few hours when we got home. When I work up (around 6:00pm), I opened my eyes (still behind the ‘bug eyes’) and felt a flood of tears roll down my face. My eyes felt as if I had been swimming in a chlorine pool and were fairly red. But, I could see! My eyes still felt better being closed, but my vision was very clear. During that evening, my eyes still felt better closed, but my vision continued to improve and stabilize.

For the next 7 days, I was instructed to put one drop of TobraDex in each eye four times a day, to wear the ‘bug eyes’ whenever I slept, and to use lubricating drops (such as Refresh) as needed. I found that the sample packet of lubricating drops irratated my eyes and caused my vision to blur. There must be an emolent or something in that brand. I had no difficulty or discomfort with Refresh brand.

On Thursday May 24, 2001, I went back to the center for my post-op. A quick evaluation ofquick evaluation of my vision revealed it to be 20/15! My incisions were examined, any questions I had were answered, and I was out the door. I have an additional appointment in one month.

On Wednesday, June 20, 2001, I went back for my one month post-op checkup. Each eye was 20/15, and with both eyes together, I was able to read 3 out of 4 characters on the 20/10 line. Again, the incisions were examined, and I was informed that they’re healing nicely. I was very pleased with that result.

We’re both off the Refresh lubricating drops for the most part. Sometimes, after a particularly active day (lots of work on the computer, driving with the top down, etc), the drops feel good in the eyes, but their use is becoming more and more unnecessary.

We’re going on vacation July 7-14 2001, and were told to wear goggles if we open our eyes underwater (I do; Wendy does not), and not to use Visene.

One thing that came up in my discussion with the doctor during my post-op visit was that, with the proper tools, the flaps on the eye can be re-opened without using the keratome up to an astonishing 18 months after the surgery — maybe even longer!